Yay! I made it through all of the VCMP challenges. This is the first time I've attempted to do that. Let's jump right into it, shall we?

Challenge 13 is at Thinking of Inking. This one took a little thought. It's called Think O-W-H! We were challenged to use at least one thing starting with each letter: O, W and H. I managed to pull it together. 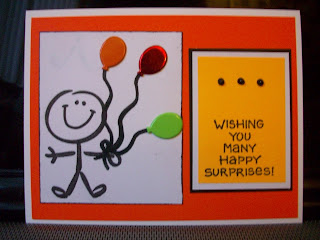 I used a couple of Os...an orange balloon and two different colors of orange paper. For the W and H, you can look at the sentiment. I haven't used brads for awhile, but I knew I had some balloon ones somewhere. You can't tell, but that red balloon has a pretty metallic sheen. The stamps are from SU! Smiles and Smiles II. The dots are black Pearl Pen. I almost added a party hat on top of the head, but didn't want to chance it lol.
Playing with Pictures and Paper has challenge 14 called Cold Temps, Warm Heart. Theresa challenged us to make a winter love card. This was a challenge since my winter/Christmas stamps are all at my mom's house. Thankfully, I had a set of clear stamps handy. 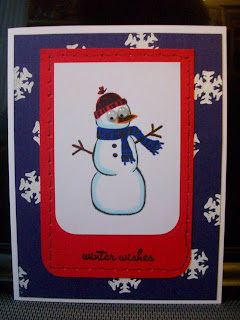 What do you think? I made my own background paper by adding embossed snowflakes. The snowman is colored with Copics. Yes, those are googlie eyes! Both stamps, snowman and sentiment, are from my clear set that I have no idea who makes. I used Sandy's stitching trick by piercing along the edges and using a black pen to connect the dots. I like this one enough to probably make more.
Next stop is Caffeine and Stamps. I enjoyed this challenge (#15) issued by Michelle. Titled Splish Splash, we were to use black and white then add a splash of color. 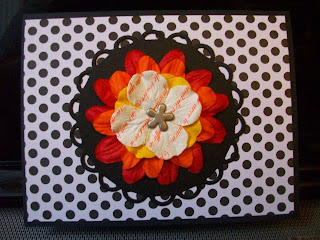 Polka dots...LOVE them! When I read about the black and white, I knew I had to use this paper. I got it about a month ago at this little store on my way to the ocean. I was so glad I stopped. I mounted it on black card stock and cut out the scalloped circle with a Nestabilities. For my pop of color, I chose to create a Prima flower. I have a lot of these and rarely use them. I think I might be using them more often now. The center is a brad. I like the fact that this card can be turned either way to be used.﻿
Dawn is our last stop on the VCMP tour. You can find it over at The Chatty Stamper. Since I had made it through all of the other challenges, I was determined to finish this one. It's called 1+1+1...use 1 button, 1 tag and 1 chipboard. I actually gave in and went to Joanns today to get some chipboard because I didn't have any! I have to give a shout out to Kathryn who posted on the OWH FB page that I could create my own using thin plain cardboard, like the kind you find on the back of a paper pack and use a die cut or Nestabilities to cut it out. I got that detail after I did my shopping lol but now I know for the future! 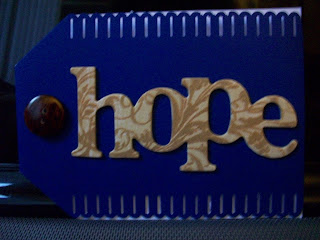 Can you see all three elements? The tag is the actual card. I have some pre-made ones and remembered them when I was trying to figure out where to put the tag. The button was originally white, but I used Copics to color it brown so it would blend a bit with the chipboard. Along the edges I used a border punch. I tried running ribbon through the bottom border before I added the top border and it looked really busy. So that's where the top border came from.

Thanks for everyone who visited and played along! I hope you had as much fun as I did. 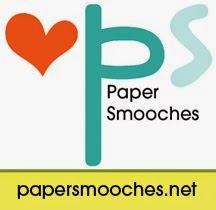